How alpacas helped a farmer in central Queensland overcome depression 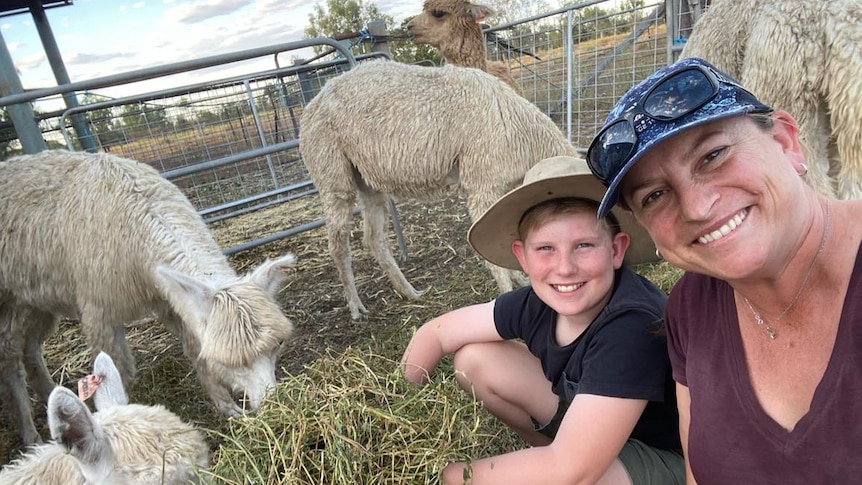 When central Queensland mum Michelle Hamilton felt the walls close after her son was born in 2009, she knew it was time to get back to the paddock.

But a difficult pregnancy and birth kept Ms Hamilton from doing the things she loved on her Springsure property, like horseback riding and gathering.

Isolated on a secluded property, with no readily available babysitters, she sank into postpartum depression.

“I was pretty hard on myself because I thought I had to have this amazing bond with my baby at first and it didn’t feel as natural to me as it should have, and I fought a lot about it. Ms. Hamilton said.

“A lot of the postpartum depression came out of it and the feeling that other people were looking down on me.

“It was a tough time. I kinda felt more isolated than I really was.”

‘I started to feel alive’

Then she encountered her first alpaca on a field day at Emerald.

“It was something a little different and they were really easy to manage on my own, so I wanted to learn a little bit more,” she said.

She started out with just two alpacas, but Ms. Hamilton’s herd now numbers 100.

“After putting them in the paddock, for the first time in a long time, I felt alive and doing something with such a unique animal,” said Ms Hamilton.

“It really awakened something in me, and I started to feel alive, happy and me again.”

“I felt Wylye was safe with the animals because they are small.”

The herd has grown from a simple hobby to a thriving business.

“It’s a nice end product and I’m sending my fleece to a company in Australia, where buyers buy it and put it into their product,” Ms. Hamilton said.

Part of the fleece is transported to the alpaca capital of the world, Peru, where fair trade producers turn the wool into products for resale in Australia.

One idea also led to another for the entrepreneur – this time closer to home.

“When I was traveling through Tasmania, I found a store that sold a lot of alpaca products and that sparked the idea of ​​opening a community store in Springsure,” she said.

Eighteen local artisans responded to her call to join in their designs, including earrings, children’s clothing and barbed wire.

“By doing things together, especially with rural women, we have found that we all like to come together and share the same ideas,” said Ms. Hamilton.

“We’re all a little eccentric sometimes and it’s great to sit down and chat a bit with a cup of tea or a glass of wine depending on the time of day!”

It’s all about alpaca

While Mrs. Hamilton’s son, Wylye, now prefers to mainly help his father with the machines, she still adores her woolly flock and has bigger plans in the works.

“I’m looking to be part of a cooperative to keep the fleece here in Australia,” Ms. Hamilton said.

“The industry is quite young and I really want to be a part of it.”