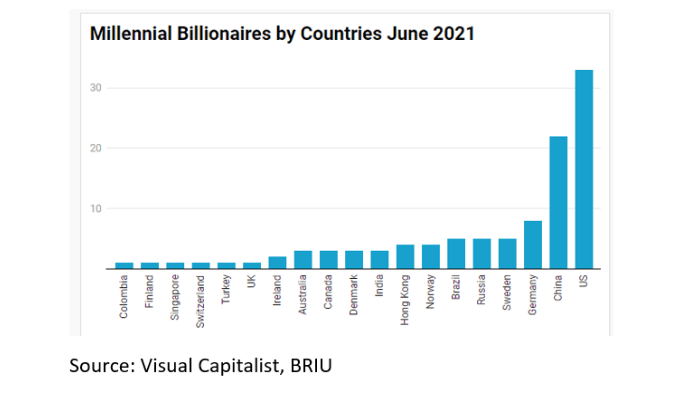 Visual Capitalist, which used the data from Forbes, said: “Of these ultra-rich individuals, just over 100 are millennials, born between 1981 and 1996. This young generation makes up about 3.8% of all billionaires. in the world.
Africa, whose countries have a combined gross domestic product of $ 2.6 trillion, is home to 1.31 billion people in 54 countries. In the list, none of the youngest generation of billionaires in the world is from Africa.

Not that the entire continent is so poor, as some of the countries that produced these millennial billionaires are not as big as some African countries when ranked by GDP.

For example, Hong Kong, Ireland, Denmark, Singapore and Colombia have their citizens on the list, but in terms of gross domestic product, they are not as big as Nigeria and South Africa ranked by Worldometers like the 30th and 32nd largest countries in the world.

“It is essentially about the environment and African countries have similar characteristics. It’s about our education system, our safety, our regulators and our leadership, among others, ”said Tomi Wale, Creative Director of Getupinc, a millennial-focused organization.
“If you plant a seed in the correct soil, it will germinate and flower. This soil is not in Africa, especially Nigeria. Due to the frustrating environment, Nigerian millennials have now made Canada their home, ”said Wale.

The 106 millennial billionaires have a combined wealth of $ 573.1 billion, with a median age of 35.6 years, and 71.6% of that wealth is concentrated in the United States of America and China. The youngest of them is Alexandra Andresen, a 24-year-old Norwegian worth $ 1.4 billion, whose investment is in diversified businesses, while the oldest is David Chen, a Singaporean from $ 2.4 billion worth, who is interested in media and entertainment, and Paul Sciarra, a $ 2.9 billion American, who is interested in technology. Chen and Sciarra are each 40 years old.

By producing 33 Millennial Billionaires, the United States accounts for $ 266.7 billion of the wealth of the youngest billionaires, or 46.5% of the total wealth of the 106 Millennial Billionaires. China produces 22 of them, with a combined wealth of $ 143.8 billion, or 25.1% of the total wealth controlled by the individuals studied. The United States also has an advantage over China in that the average age of American millennial billionaires is 35.6 years while that of China is 36.9 years.

Ireland has two millennial billionaires with a combined value of $ 6.4 billion, which is 1.1% of total wealth. Others like Colombia, Finland, Singapore, Switzerland, Turkey, and the UK each have one.

By economic sector, 34 of the 106 billionaires of the millennium drew their wealth from technology, 15 from finance and investments, 10 from media and entertainment, eight from automobiles, seven from fashion and retail, six each from diversified, healthcare and manufacturing, five from real estate, three from metals and mining, and two each from food and beverage, energy and services.