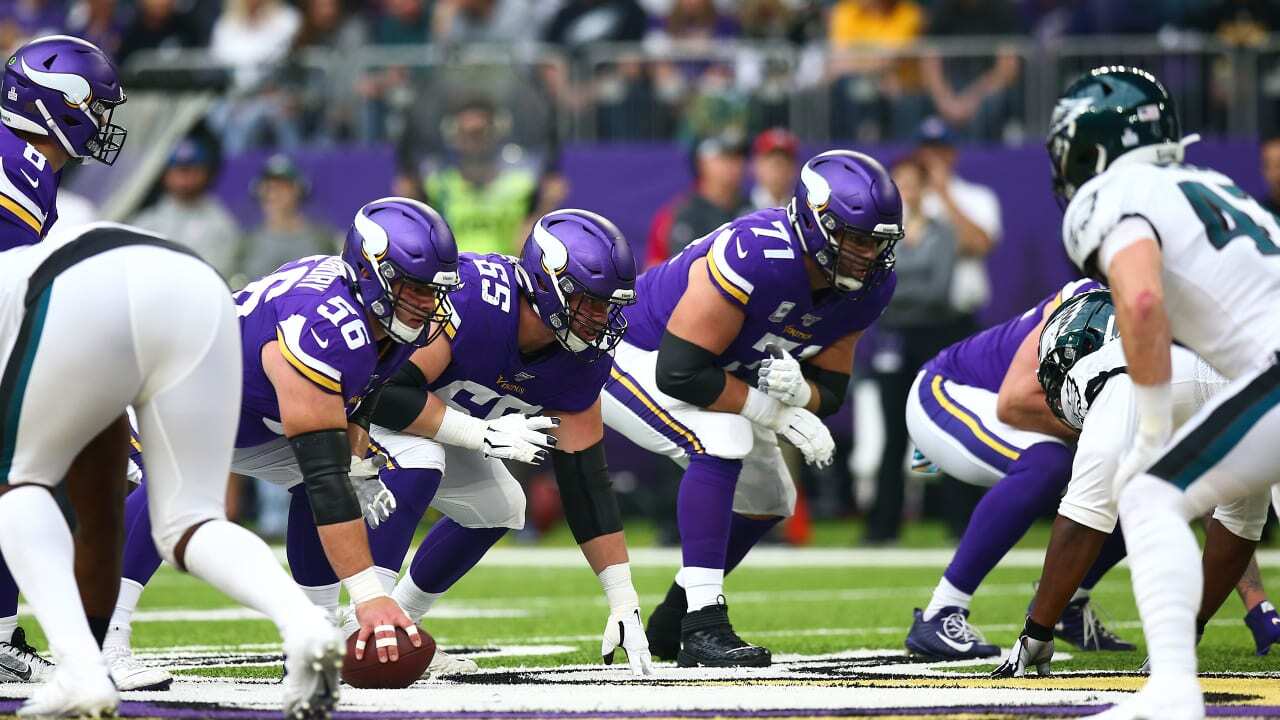 The trenches. This is where the game is fought and won and lost. If your defensive line dominates the line of scrimmage, your chances of winning increase. If your offensive line protects the quarterback’s ability to make plays and open holes for the running back to reach the second tier and eventually the end zone, your team will be tough to beat. It always has been, despite our ability as fans to ignore war in the trenches. And of the two lines, I would say, for the Minnesota Vikings, the offensive line is the more important this coming season.

I grew up focusing my attention on these shiny things dressed in the purple of the Vikings. Fran Tarkenton, Chuck Forman, Gene Washington and later Ahmad Rashad. Decades later, I fell in love with Randy Moss and Adrian Peterson (among the brightest things in Minnesota) – and even Brett Favre and Percy Harvin for a short time. And more recently, Dalvin Cook, Adam Thielen (and, before leaving abruptly and hastily, Stephon Diggs) delighted me. (And I see you, Justin Jefferson.) Sure, I noticed the Purple People Eaters of Alan Page, Jim Marshall and Carl Eller, how could you miss them? But that usually happened when there was a sack and obliteration from the opposing quarterback, not during a routine stoppage on the first down.

Then one day my father told me that “the game is won in the trenches”. My initial thought was, “This is pretty boring, dad. It must be a generational thing. Well, boring or not, the old man was right. And even on this air attack-oriented NFL day where the rules favor a high-flying offensive over a ground and a pound, three yards and a dust bowl cloud of the past, it is still. true. The game is won in the trenches.

Okay, not a full reveal these days. Most observers know this, but how many of them are intensely focused on the “Battle of the Bulge” unfolding through that digitally painted line of scrimmage on your television screen? Admit it, as soon as the ball is broken you hope and seek it ends up in the hands of your fantastic player, then pray that it crosses the goal line. If the quarterback is sacked, it’s only then that you realize, “Hey, that’s a point for me on defense.”

We’re all looking for points and who scored them – and the offensive line isn’t rewarded with any points in fantasy football and, maybe, not as many game balls in the locker room. It is a relatively thankless job in football.

But since my father’s wise comment, I’ve paid more attention to the offensive line. I’ve come to appreciate people like Randall McDaniel, Matt Birk, Gary Zimmerman, and Todd Steussie (and lament the tragic loss of Korey Stringer), while taking them for granted. In fact, I had called on recent Viking front offices to pay more attention to the offensive line (dare I say even a little before the UFFda! Intrepid sports leader Joe Johnson [who also likes shiny things on offense] started to laugh at it) – and now it looks like they did.

Therefore, it was then time for the offensive line. While releasing left tackle Riley Reiff for cap purposes, the Cap Vikings traded for center Mason Cole, resigned goalie Dakota Dozier and agreed to Rashod Hill’s terms, and we all hoped it wouldn’t. not the end. In the 2021 NFL Draft, the Vikings proved no, with selections from tackle Christian Darrisaw in the first round and guard Wyatt Davis in the third. Finally, all of us looking for an infusion of talent on the oline (which includes quarterback Kirk Cousins, 32) breathed a sigh of relief.

But very soon our collective collars started to tighten as we realized the Vikings would most likely start a rookie left tackle at Darrisaw, a rookie right guard at Davis, a center coming out of a year at Garrett Bradbury and a right guard, formerly a tackle, moving again to left guard at Ezra Cleveland. Right tackle Brian O’Neill, whose career path continues to rise (and is within a year of contract), featured sideways (with Cousins) put his hands on his chin and issued a ” hmmmm “audible.

It will take some time for this group (if that’s what it is) to merge, which is why their game will dictate Minnesota’s season. There are already complaints from Purple Nation about why Darrisaw and Davis (who we soon hope to call the “Killer D’s”) clashed with those from the OTAs last week. Patience is already starting (during the first week of July) to run out. Every trench watcher, like me, knows that success on the oline comes from a lot of playing time together to create continuity, camaraderie and consistency – at least that’s what we’ve always had. said. Thus, the sneers on Twitter about this “possible” departure of five years together are somewhat justified.

But the Vikings will take their time figuring it out, given the importance of winning now (which seems counterintuitive, but they have to get it right). Cole could feature in the final analysis, as Zimmer isn’t a fan of the starting rookies (and rarely does unless forced to), so look for him to fight for a guard spot if he does. does not install in the vault. And the Vikings quit Dozier for a reason. He won’t easily walk away from a guard post, and maybe not immediately, as recruits have to prove they’re ready.

Either way, that’s a long way to say that the Vikings’ offensive line is crucial this season. The defense will improve (hard not to) if they find a healthy and happy Hunter, Peterson still has something in the tank and the cornerback game improves. Zimmer will take care of that. But the oline will have to set up quickly and become an asset. Last season, the Vikings finished fourth in footage despite a line that needed to be redesigned during the offseason. If they pull back before they become a solid unit, the team could be behind the early eightball with a tough schedule looming.

Or the new line could solidify quickly and become a strong force in the team for years to come. O’Neill is in his fourth year, Bradbury his third, Cleveland his second, so add a few talented recruits, and it’s not hard to imagine this as a unit that will fight (and hopefully win) wars. in the trenches for years to come. It’s time for the offensive line fixing to work in Minnesota. It’s been a minute.